Given how the airport supporters consistently claim that 98% of Thanet supports RSP’s plans for a 24/7 cargo hub airport, it was interesting to see that they could only get 286 people to respond to their survey about RSP’s consultation.

We decided we could do better even though it was only 48 hours before the end of the consultation.  We carried out our own online survey among our supporters to see if we could get more than 286 people to respond in such a short period of time. By 2pm on Sunday 23rd July, we started pulling the data together although people are still completing the survey as we speak.

And we had a couple of respondents from Deal and Canterbury

As you can see, unlike many of the airport supporters, ours are drawn from the people most affected by RSP’s plans, people who, in the main, live under the flight path. 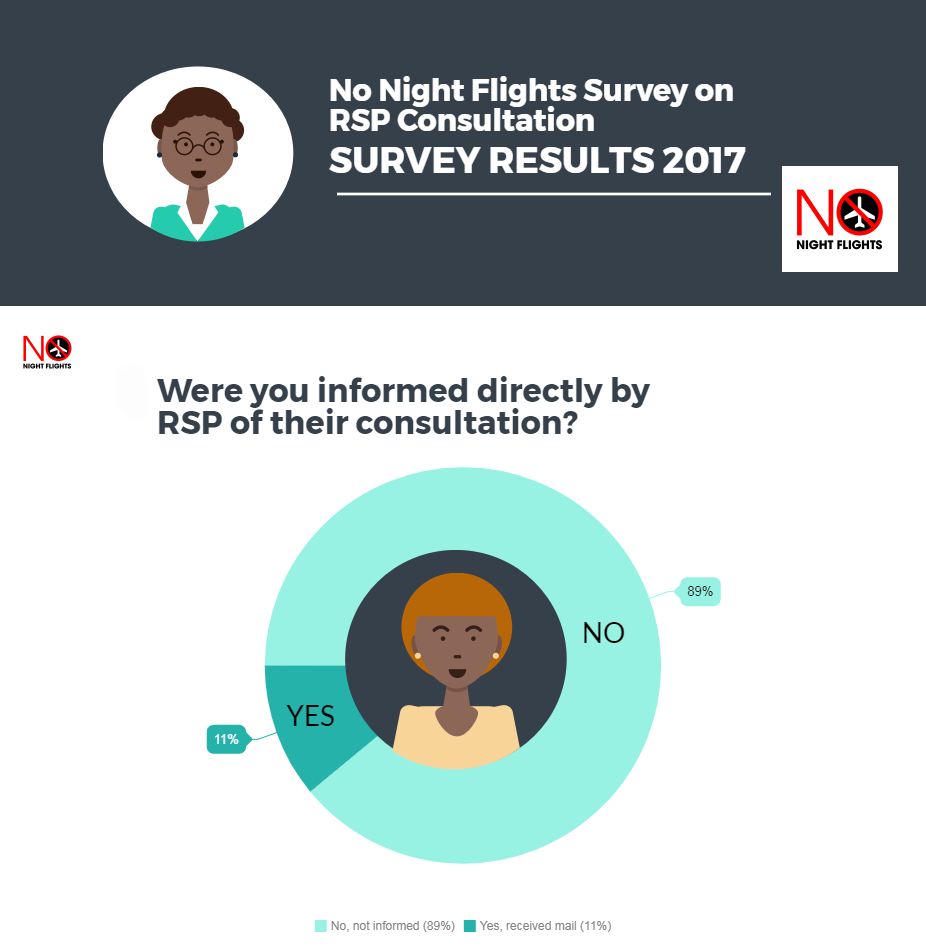 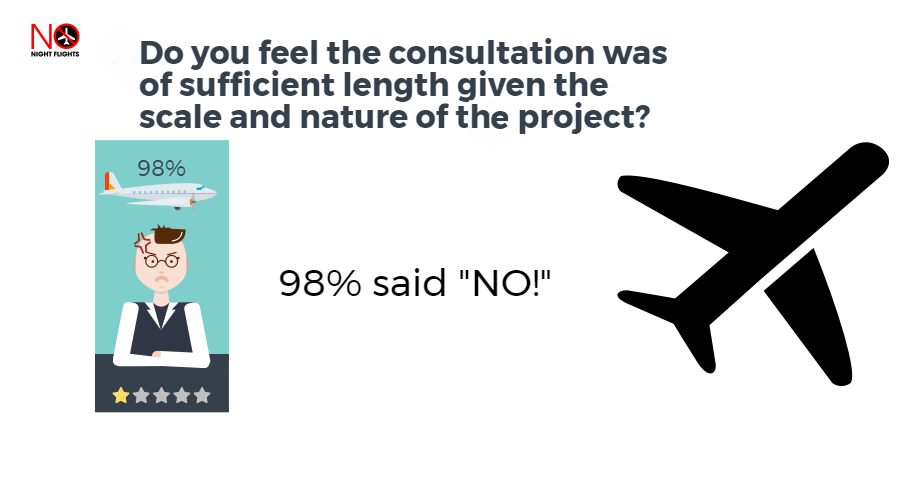 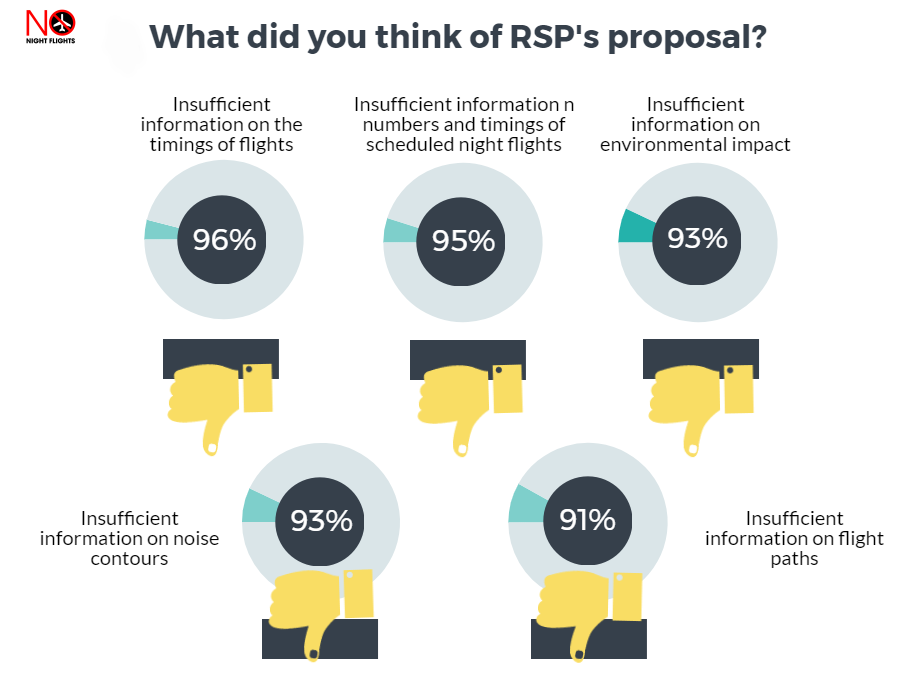 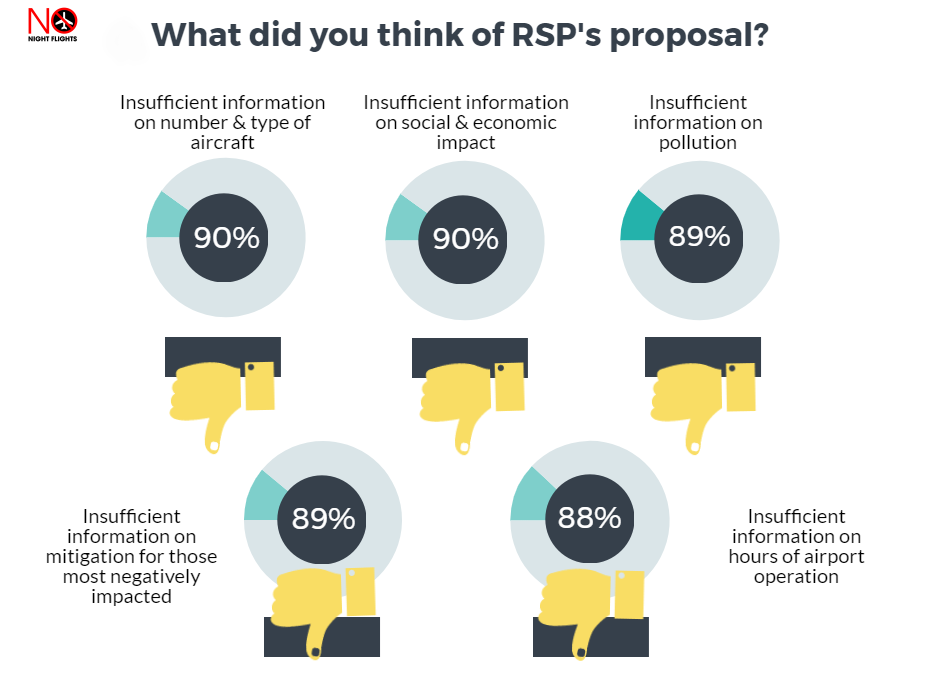 Here is a fuller analysis of the survey results.

The vast majority of respondent, 89%, live under the flight path of the old Manston airport and would be directly impacted by the RSP proposals.  A resounding majority, 89%, had not been directly informed, by mail or leaflet, of the RSP consultation, with only 35 respondents answering positively to this question and 5 people not responding.

NNF had obviously publicised the consultation and the consultation events to its members, indeed, NNF had distributed 40, 000 leaflets across the flight path given that RSP had neglected to directly inform the vast majority of residents and businesses most affected but had only been able to do so after the events had taken place.  This meant that the majority of people were unaware of the events and could not attend.

Of our respondents, 206 had not been able to attend an event.  It should be noted that our respondents were drawn from a pool of established NNF supporters who were at least aware of the events.  Even so, only 34% had been able to attend any of the consultation events.  Nearly unanimously, 98% of of our participants felt that the consultation was not of sufficient length given the scale and nature of the proposed project with only 2% agreeing that it was of sufficient length.

Of those that did manage to attend an event:

Respondents struggled to find/access documentation with some unable to do so. Even those who did manage to access the documentation struggled to make sense of it.  Only 29 respondents found it accessible to read in language and length.  Only 13 found if sufficiently informative and only 2 said that they found it sufficiently referenced through sources accessible to them as members of the public.

Regarding the business case and proposal itself, there were real deficiencies that our survey highlighted. 258 respondents had been able to access and read the information/documentation and responded as below:

The NNF survey, in an extremely tight time frame, managed to hear from 318 members.  The airport supporters managed only 286 responses to their survey despite running it for over 2 weeks.  What is evident is that the RSP statutory consultation has failed to reach the vast majority of people who will be most affected by their proposals. This is on of the most serious flaws in this consultation.  Added to this, as evidenced in this survey, are failings with regard to the events, the staff, the information, the business case and the proposal itself.

The vast majority of respondents here come from Ramsgate and Thanet and are extremely unhappy with the way they have been treated by RSP and with proposals that lack any real information or detail on which to form a judgement.

1 thought on “What do people who live under the flight path think about RSP’s consultation?”